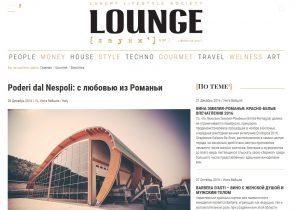 I was able to get to know the winery Poderi dal Nespoli (www.poderidalnespoli.com) in November of 2016 during Enologica  in Bologna  This event helped to ensure that the winemaking talent of Romagna deserves continued and increased attention from connoisseurs of Italian wine.

For quite some time now Poderi dal Nespoli has enjoyed a good reputation not only among the influential wine critics (such as Hugh Johnson), but also among a large wine lover following in many countries around the world.

This historic farm has been making history since 1929 when Attillo Ravaioli planted his first rows of vines on the acquired plot of land named Prugneto, situated in the village Nespoli, which is now only a small part of the 110 ha of vineyards owned by the winery Poderi dal Nespoli.

What makes the wines from Poderi dal Nespoli stand apart? First, they are generously reflecting the potential of the wine making area of the Bidente Valley, located between the Apennines and the sea. Further, the features of the terroir, help in cultivating the local variety Sangiovese, already for a long time. Many wine experts are considering this terroir not just as unique, but as ideal for the cultivation of this grape variety. Therefore the wine produced here, fully bear the imprint of both the local soil, micro- climate and excellent exposure of the vineyards, as well as the winemaking traditions of the winery. And if we add to this also the modern technologies of Poderi dal Nespoli, it becomes obvious why it is considered as one of the most successful in the Emilia-Romagna region.

Not to overlook, this may also contribute to their young oenologist,  Maria Soledad Adriasola Lang, young but already with experience in Chile and Sonoma wine country in Californian.

Il Nespoli
Romagna DOC Superiore Riserva Sangiovese (Sangiovese 100%)
Ruby color. The aroma has ripe garden berries  together with a delicate touch of oak notes. The taste is balanced and smooth. Present in the Latvian market.

Thanks to its beautiful and convenient location, tourists are welcomed to the hotel Borgo dei Guidi owned by Poderi dal Nespoli.

This small, renovated villa, built in the early XX century, offers comfortable rooms and a restaurant which serves local specialities. Borgo dei Guidi is located between the winery on one side (directly in its territory) and the park on the other.

The hotel is very popular among lovers of quiet and a worthy holiday. It is visited by tourists from all over Europe, it’s just a stone’s throw from there to Bologna, Florence is only one  hour by car and less than half an hour from the Adriatic coast. For those who want to learn the cooking of dishes of Romagna region there are also special classes of traditional local dishes held at the hotel restaurant. You can find more detailed information on the web site www.borgodeiguidi.com